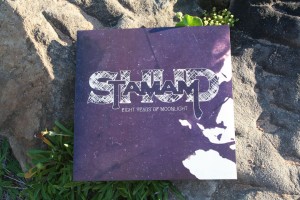 The band, Tamam Shud is synonymous with world surf film and music history.

From their first surf film soundtrack in 1967, A Life In The Sun, they went on to write and perform the music to surf films, ‘The Hot Generation’, ‘Evolution’, ‘The Way We Like It’, and the iconic 1971 Australian surf film classic, ‘Morning Of The Earth’.

They have also released many singles and albums since 1969, and their music has featured throughout Australian popular culture, and has influenced many subsequent bands, such as Midnight Oil, INXS, Celibate Rifles, Pond, etc.

Rob Hirst from Midnight Oil once quoted that, ‘Bands of the 1990’s such as Midnight Oil, Inxs and the Celibate Rifles, must all in some degree be indebted to the “Northern Beaches” sound, as pioneered by the legendary Tamam Shud. Vive Le Shud!”

The Shud’s music has been an integral part of Australian touring successes like, ‘Long Way To The Top’, and ‘Morning Of The Earth Performed Live’, as a full theatre experience featuring Brian Cadd, Mike Rudd and Lior etc.

The Shud’s music has also been recorded overseas by other acts such as The Pandoras, who have fallen under the spell of Tamam Shud’s imaginative style of music.

The Shud’s music has always delivered the feel of the ocean, tied in with rhythmic feels that make you move and connect with the planet and the ever changing culture we are all part of. The Shud’s spontaneous approach to playing and performance brings the audience into the fold as they go through the songs and music that have inspired so many music and surf life-style lovers.

The band performs the most popular selections from the films and albums they have done since 1967 up until now, culminating with tracks from their latest album release, ‘8 Years Of Moonlight’.